Gondwana has been built on a wealth of history

A Sense of Time & Place

Kwena Lodge was inspired by our historical heritage and the Khoikhoi villages who lived here, with their simple dome-shaped huts with grass roofs. 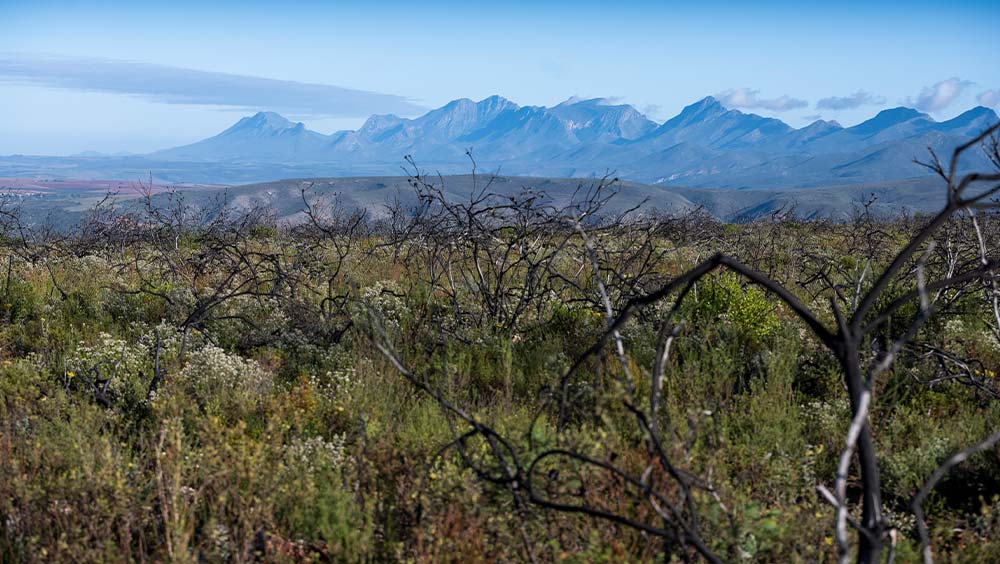 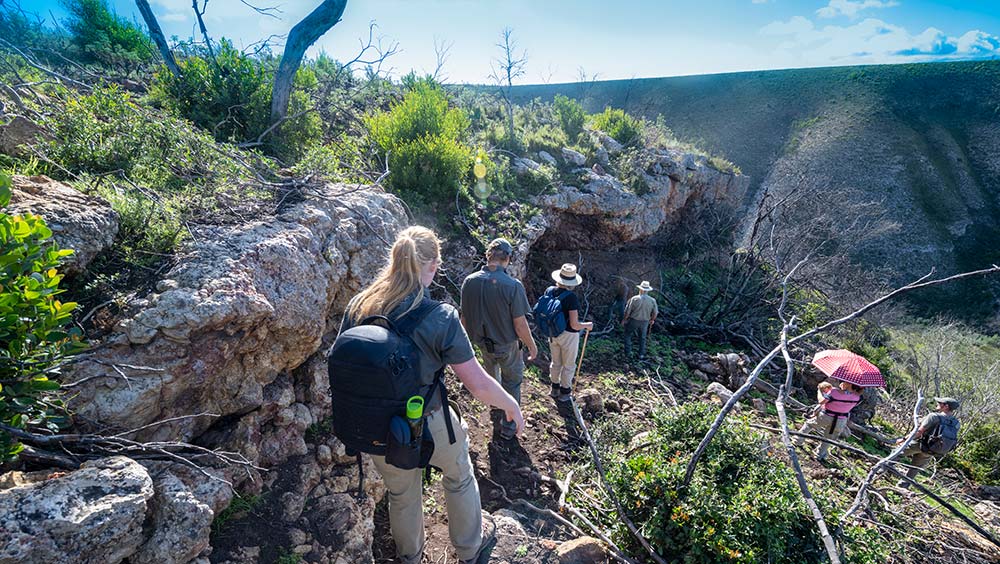 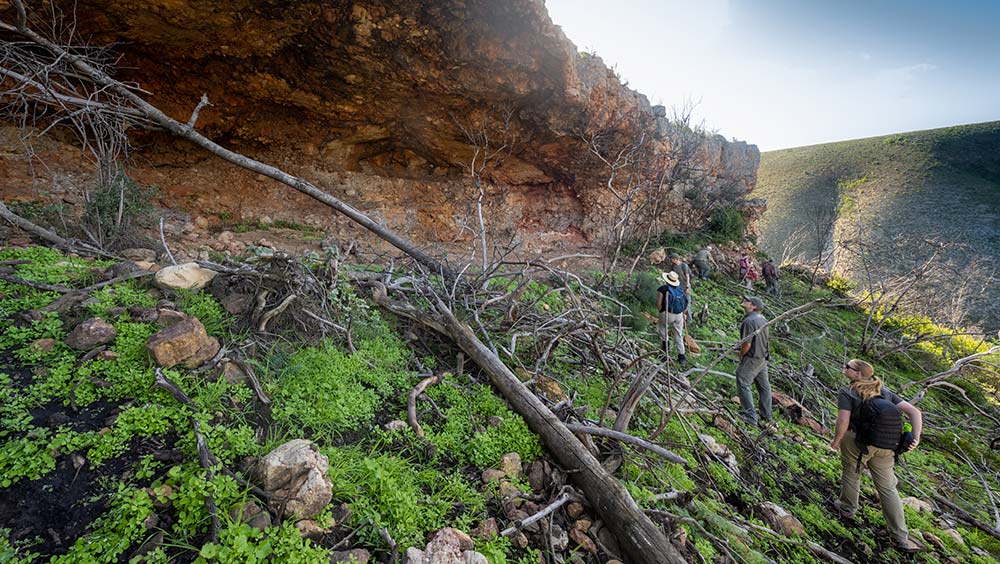 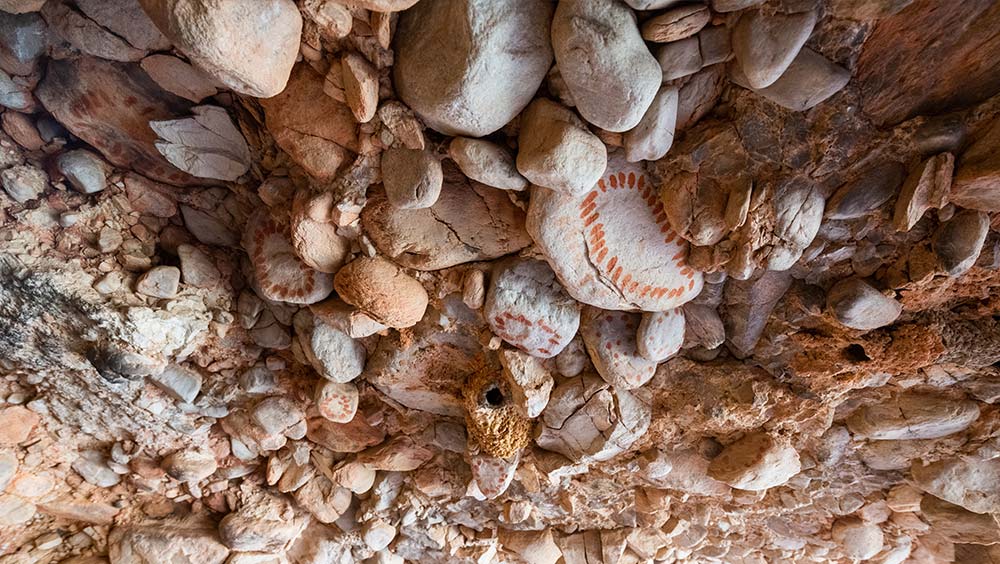 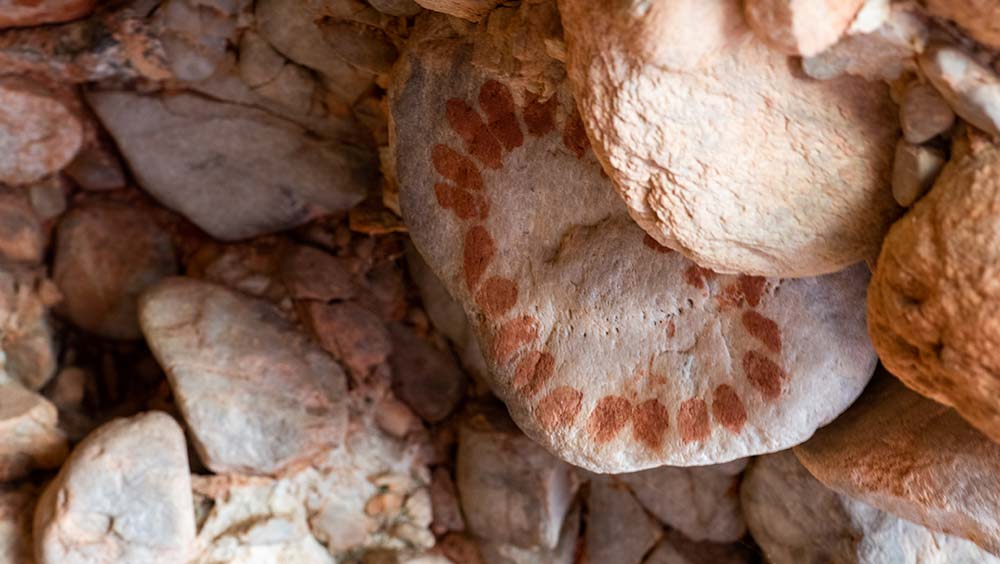 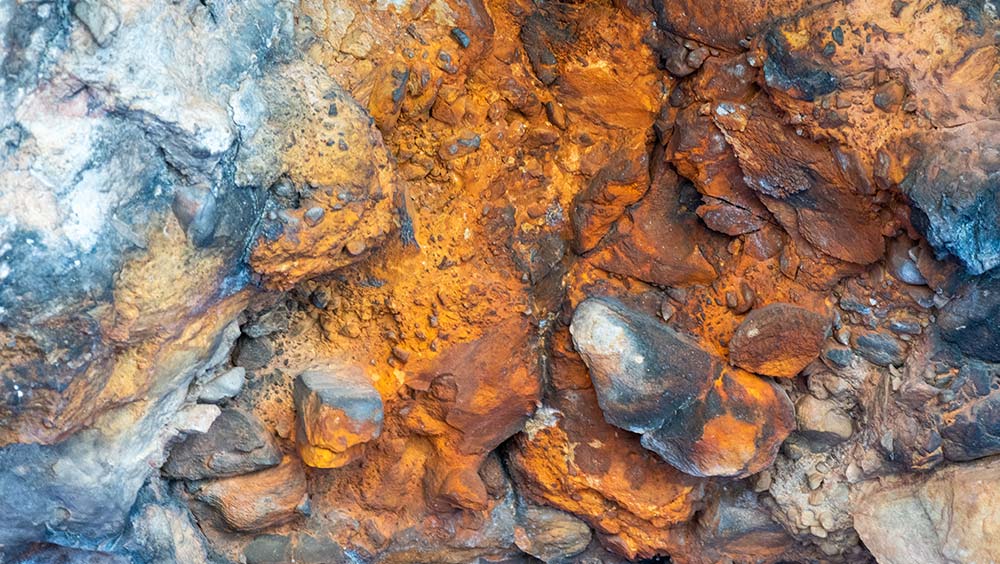 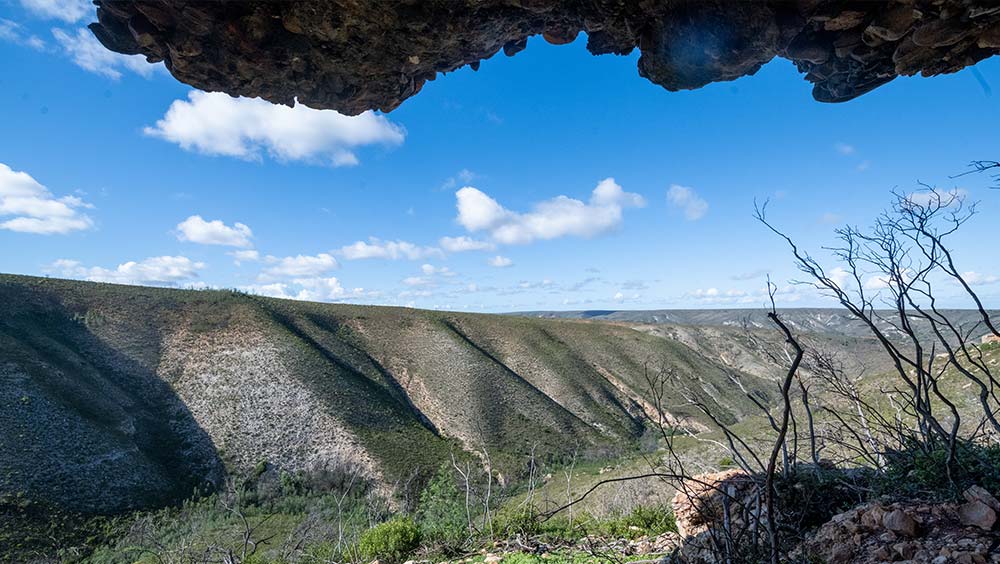 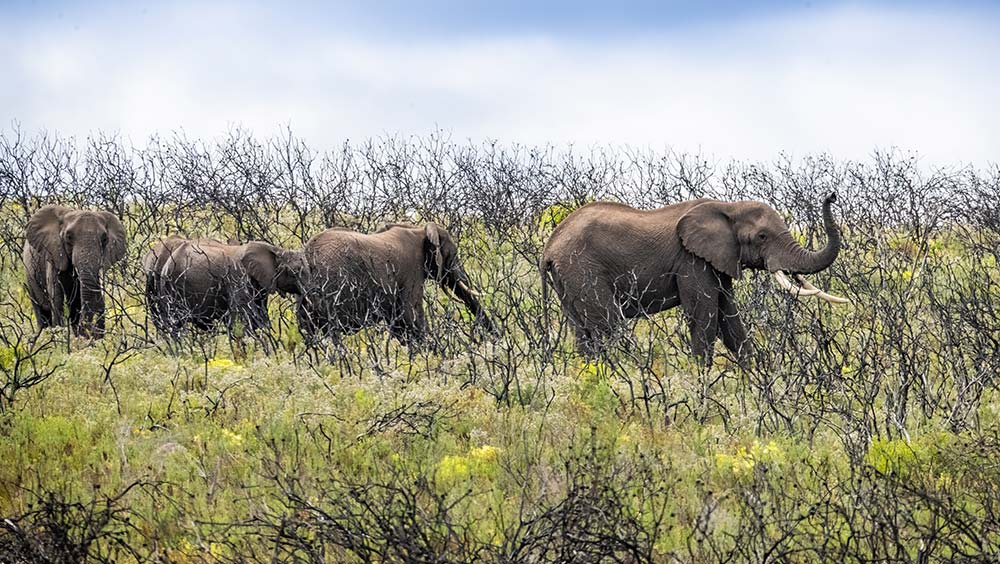 Between 195 000 and 125 000 years ago, an ice age covered much of the planet with thick sheets of ice. The human race, which had been growing in numbers and spreading, was almost completely wiped out. But not quite, for in a milder, sheltered part of the coast of South Africa, the conditions were perfect for an abundant supply of both protein and carbohydrates to sustain the few who found themselves there.

This mild location was Mossel Bay, and some of the earliest evidence of intelligent men and women has been found here. The cave system at Pinnacle Point (now a golf estate 15 minutes from Gondwana Game Reserve) was their home, and they became skilled at both gathering shellfish on the coast in the area revealed between high and low tides, as well as digging for the nutritious bulbs, tubers and corms of the fynbos and renosterveld plants that flourish in the area.

Interestingly, as a result of the high Omega content of their shellfish diet, the inhabitants of Mossel Bay developed large brains and increased intelligence, which is why evidence has been discovered here of people making advances long before anywhere else. The local inhabitants found a way to use fire to refine their stone spearheads to sharp blades as far back as 165 000 years ago, as well as developing the technology required to embed these blades into bone and wood to make effective spears. They also began to use pigment for decoration around this time.

It is to this remnant of people that we owe our own existence today for the human population was reduced from thousands to mere hundreds. As conditions gradually improved groups of survivors journeyed north to Europe and on around the world. Some remained in Africa, and spread throughout the continent. Eventually two groups developed who inhabited the southern tip of the country (The Cape) more than a thousand years before the first European settlers arrived. These two groups were the Khoikhoi and the San. Collectively, they are known as the Khoisan. Although linked by their name and the sound of their language, they come from two very different cultures.

Bartolomeu Dias, a Portuguese discoverer, was the first European known to set foot on South African soil when he arrived at Mossel Bay in 1488. The first indigenous people he encountered were nomadic herders who had lived in the Cape for over a thousand years, the Khoikhoi. The local people were startled by the sudden appearance of the Europeans and fled inland, taking their cattle with them. The two groups were unable to communicate with one another and misunderstanding arose when the newcomers helped themselves to water from a water hole. The Khoikhoi, also now known as “Cape Herders” considered the water to be their property. Their practice was to share water with anyone who requested it in a polite manner, and who offered a gift. The Europeans were unaware of this custom and helped themselves. This lack of communication and understanding hampered relationships between the two groups for many years.

The European travellers gave the name ‘Hottentot’ to the people who already lived in the Cape. However, the herders called themselves Kwena or Khoikhoi (meaning ‘real man’ or ‘real person’). These nomadic herders were a hierarchical people, with the wealthy owning large herds of long-horned cattle, fat-tailed sheep and goats. They were served by those who owned no stock. They also employed herders to care for their animals, rewarding them with the occasional lamb. The Khoikhoi rarely killed their herd animals, but made use of their milk, and would hunt for meat amongst the herds of antelope and other animals that inhabited the land around them. They would feast on red hartebeest, bontebok, eland, Cape mountain zebra, grey rhebok, bushbuck, porcupines and other endemic animals. It was only when a large animal was killed, such as a hippo or elephant, that they would kill a domestic animal as part of a ceremonial celebration.

The Khoikhoi had to move continually to find adequate grazing for their animals, so they needed accommodation that was mobile in nature. In spite of this, they lived in large village groups with more than one hundred inhabitants. Both men and women were involved in building these homes. The men would cut flexible young trees and plant them in a circle in the ground, then bend them at the top and fasten them together to form a dome. The women and children, meanwhile, would gather reeds, which they would painstakingly sew together to form mats. These reed mats were then flung over the dome structure and fastened to it. The dry reeds would allow a breeze to blow through the homes in the heat of summer

When it rained, the reeds would swell and protect the interior, keeping it relatively dry, and when it was cold the Kwena would line the interior of the huts with animal skins to keep them warm. The dwellings were solid and practical.
When the Kwena needed to move for fresh grazing, they would roll up the mats covering their homes and take them with them. Sometimes they would move the dome-like structures too, but if they knew they would be returning to the area in the near future, they would leave these behind and simply build more in the new location.

Kwena Lodge was inspired by these Khoikhoi villages, with its simple dome-shaped huts with grass roofs for each guest room. We wanted the lodge to tread lightly on its environment like the Kwena did, as if it could be dismantled and moved if the need arose. We utilized worn dirt and wood chip paths to lead from hut to hut rather than decking and many of the décor accessories are items the Kwena could have been found on the land to utilize, such as wooden stumps for side tables and bar stools, cow hides for rugs and covers, and we made a decorative screen in the Kwena Lodge bar of bone, shell, hide, and quills, which all would have been found as they moved through the area. The photographs of the long-horned Watusi African cattle in the dining and lounge areas also pay homage to the Cape Herders who grazed the ancient lands of Gondwana.
It was only in 1655 that a Dutch expedition discovered a different group of people whom they described as being ‘of small stature, subsisting very meagrely, quite wild, without huts, cattle or anything in the world, clad in small skins like these Hottentots and speaking almost as they do’. These are the San people to whom the Dutch gave the name of Somquaas or Bushmen.
The San were hunters, not herders, and they lived in small groups comprising fewer than fifty people. They shared all they owned other than a few personal possessions and saw themselves as equals within the group. The arrival of the Khoikhoi with their animals put pressure on the livelihood of the local San hunters. Relationships between the two groups were therefore not always friendly.

The European settlers found the clicking language of the San and the Khoikhoi very difficult to learn and so, by the early 19th century, many of the Khoikhoi herders adopted the Dutch language, giving the first indication of cultural change. Inevitably cultures mix as time goes by. In the 21st century, there are people who proudly claim Khoikhoi ancestry and increasingly understand it as an important part of their identity. The Kwena live on in their descendants today.

~~
We would like to thank Mandy Hackland, an author and family member, for helping put this history of early man in our area together using the following reference: The Cape Herders, A History of the Khoikhoi of Southern Africa. Emile Boonzaier, Candy Malherbe, Penny Berens, Andy Smith; David Philip Publishers, 1996, Cape Town, 2015 Copyright protected.